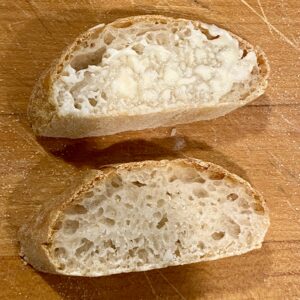 About a week ago I decided to try making Bouchon Bakery‘s master recipe for Batardes.  It had taken me a few weeks to assemble the materials needed to generate oven steam but I was finally ready. I couldn’t wait to bite into a beautiful artisan loaf that had been baked by yours truly. Long story short —  my first endeavor was a big disappointment. Not only were my loaves much smaller than anticipated, but the bottoms did not brown up at all.  I felt extremely discouraged and quite honestly, I once again considered giving up on baking bread. 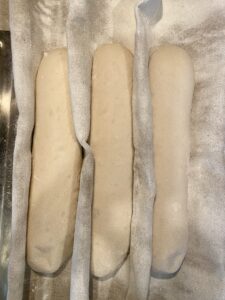 After a few days, I picked myself up and decided to figure out where I could make improvements. My husband had liked the flavor of the bread, so I felt like the recipe had hope. I googled a few things and discovered that too much water in the oven may have prevented the bottom of the bread from browning. The book had suggested using about a cup and a half of water for the steam. I had used two or more cups of water, thinking that more must be better. As far as the size of the loaves, I suspected that it had to do with my proofing time. Although the bread had proofed for the prescribed 60 minutes, it did not proof in a warm area, and it had not risen much. I had been rushing to get the bread baked in time for dinner, so I had gone against my better judgment and put it in the oven anyway. There is a small section in the book that talks about common mistakes people make when baking bread. It says that usually when people are unhappy with their bread, it is because one or more of the steps was not fully executed. As I think back on my bread baking, I can see that this is probably true.

For my second attempt at baking the master recipe, I decided to make demi-baguettes. The recipe uses the same ingredient ratio as the batarde recipe, but in smaller amounts (about a third of the master recipe). I mixed up the poolish the night before as it must sit for 12-15 hours prior to making the bread. A poolish is a type of preferment that is used for most french breads. A preferment is a small part of the recipe that is mixed ahead of time and allowed to ferment. This creates a better structure as well as a more complex flavor.  I added extra water to mine since the recipe describes it as having the consistency of pancake batter. I really appreciate the additional information provided in the recipe which helps me determine whether things are on track. 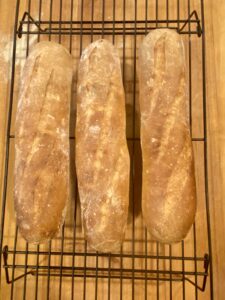 Due to running errands the next day, the poolish sat for a full 15 hours before I started the bread. I mixed the rest of the ingredients and after the 3-hour fermentation stage, I pre-shaped and shaped the dough as instructed. After proofing the dough, it again seemed like it had not risen much. This time, I decided to give the dough more time, and I moved it to a warmer location on top of the stove. After another 20 minutes, the dough had risen more and when I pushed a finger in it, it did not bounce right back. I used semolina flour on my bread peel which helped the loaves slide onto my new pizza stone. (For my first endeavor I had used a rimmed stoneware baking sheet but that proved problematic for the transfer.) Before closing the oven door, I threw 1-1/4 cups hot water into the hotel pan which was filled with lava rocks.

I baked the bread for the full 20 minutes at which point the demi-baguettes were nicely browned. I tested the internal temperature of the loaves and they were at 206 degrees so took them out and cooled them on a metal rack.

One the the loaves had cooled, I eagerly cut into one of the loaves. I was very pleased at the crunch of the knife slicing through the outer crust. It truly felt like a loaf that I would have purchased from a fancy bakery. The inside of the bread had a nice texture and was very soft yet maintained its shape. And finally, the flavor was exactly what I hoped for.  The only thing that I would change is I would like a slightly loftier shape that would be more round than oval.  Barring that, I was very happy with the results.  And considering that the loaf disappeared that night, I can say that my family heartily agreed.