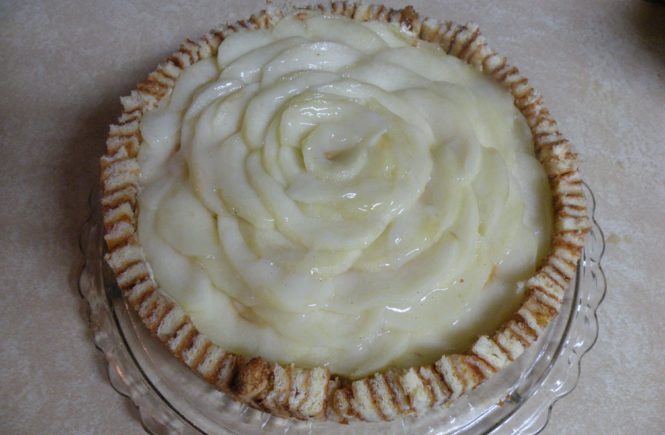 Baking the Apple Caramel Charlotte was unlike anything I have ever baked before and will not likely do again soon.  I actually baked the Charlotte a week ago because I had made several baking commitments for this weekend and knew that something as involved as this Charlotte was just not going to work.  Even so, I really underestimated how much time this recipe would take and it was not what I needed to start off a very busy week.

The first step of this recipe was to make the biscuit or crust.  Mixing the batter was definitely the easiest part.  The eggs and sugar are mixed in the Kitchenaid.  Then you beat the egg whites into a meringue and fold it into the batter. 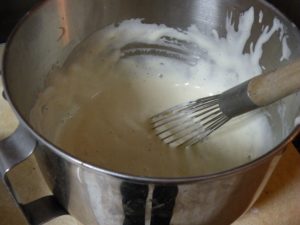 It is baked in a half-sheet pan until golden brown and then removed from the pan at once.  Then comes the more time consuming part: after the cake has cooled, you must cut the cake into an 8″ round circle and 4 strips that measure 8-1/4″x2-1/’. 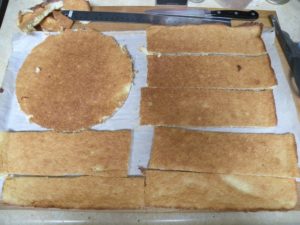 The strips are stacked and layered with apricot preserves.  Then you wrap it and freeze it. 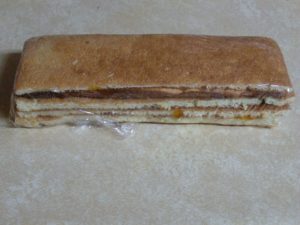 It was late so I decided to poach the apples the next day when I did the rest of the baking.  I couldn’t find any tart apples other than Granny Smith so that is what I used.  These were put into a pan just large enough to hold the apples in a single layer.  They are heated in sugar water with a little lemon juice, calvados and a vanilla bean. 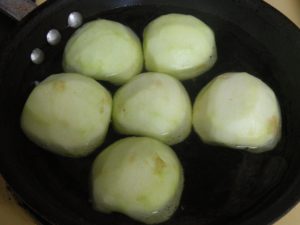 After the apples were poached, I completed the crust.  I removed the strips from the freezer and cut them into 3/8″ slices.   Then I lined the mold with the crust slices. 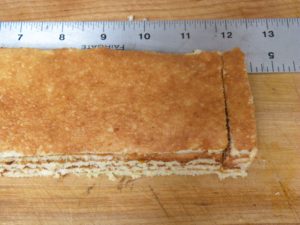 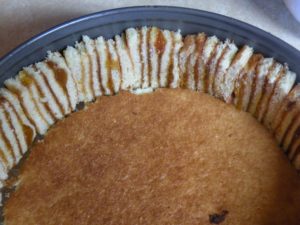 Next came the Caramel Bavarian Cream Filling which has two main components: the apple caramel custard and meringue.  As I began to make the apple caramel custard, Hubby asked if he could use a burner on the stove.  I figured no big deal, all I need is a burner for the caramel.  Five minutes later, as I had pans heating on three burners, we decided that trying to share the stove may not be a good idea.   You must heat some poaching liquid along with gelatin in one pan.  Another pan has egg yolks in it and the third pan is needed to make caramel.  After the caramel is ready, you add the poaching liquid/gelatin to it, and then you combine the yolks.  This whole mixture must then be brought to the boiling point and put through a strainer to chill.  As I went to make the caramel I made a very careless mistake by confusing the amounts for the water and the sugar which meant I had far too much water added with the sugar and after heating and heating, it was just never going to turn into caramel.  All the while, the poaching liquid was boiling on the back burner.  So I had to redo the caramel and I was back on track. 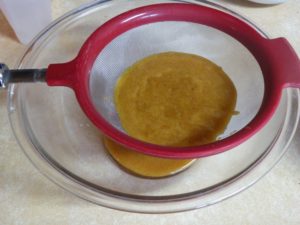 Component two for the filling is an Italian Meringue made by making a simple syrup of sugar and water and then combining it with egg whites that have been beaten to stiff peaks. 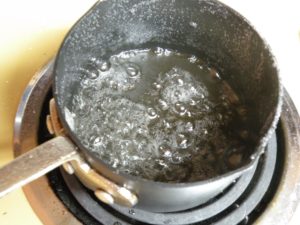 Finally, after you have the custard and the meringue made, you must combine them both with some cream and Calvados. This would seem pretty straightforward but this part really gave me grief.  This was because Rose has you cool the apple caramel custard in an ice 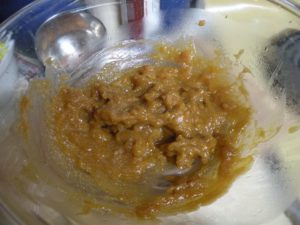 water bath and you are to get it to a point you can drop it off a spoon and it will lightly mound.  Well, my custard was already almost to a gelatinous consistency before trying to cool it down and I could see that there was no way it was going to drop off a spoon and mound.  (You can see the horrible consistency in the picture.)  I proceeded to have a small meltdown because I had already spent so much time on this dessert and now it appeared I wasn’t going to be able to complete the next step. I was ready to quit and be done with this whole recipe but Hubby stepped in with his cool analytical mind and figured out how to salvage things.  We decided that I must have lost some of the liquid when I was having trouble with the caramel and had the poaching liquid boiling for an extended period of time on the back burner.  So Hubby reheated the custard mixture and added some liquid.  It seemed to be working so I continued on.  Cooling this mixture down just doesn’t seem to make sense to me and and as we cooled it down it again started turning gelatinous so I am still questioning what this step is all about but whatever. We did manage to get everything combined and the completed Bavarian Cream Filling promptly went into the crust. 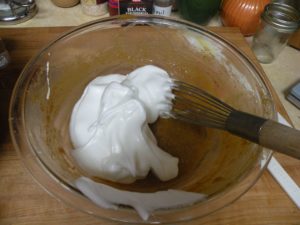 Next came the slicing of the apples and then arranging them into a rose.  Normally this would be my favorite part but by this point I just wanted the thing done. 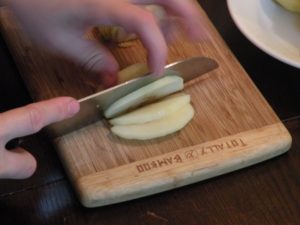 The final step is to make a glaze that is brushed over the top of the apples.  The Charlotte then goes into the refrigerator overnight.  Once its in the fridge, you can begin the major cleanup involved after dirtying so many dishes and pans.

The next night we had a friend over for dinner.  It was nice that the dessert could just be pulled from the fridge and be ready to go at that point.  The appearance of the dessert is really quite spectacular.  The taste was good but not the wow that I anticipated.  I admit that some of this may be because I was still holding a small grudge over how long this took to make.  Hubby liked it a lot but agreed it was a lot of work to make.  My friend enjoyed it also but she observed that while the crust of this dessert is very beautiful, flavor wise it doesn’t really seem to complement the apples and custard.  She said it was like it should go with some other dessert, and I agree.

So, there you have it.  I would not totally rule out ever making it again and perhaps it would go a little smoother the second time around. But at the same time, it was not so amazing of a dessert that I felt like it warranted the work involved.